Grounded in the highland games tradition, the track, light and heavy field events bring together speed, strength, stamina and agility. Watch athletes from near and far compete to run the fastest and jump or throw the furthest and highest. There are medals to be won and records to be broken!

Competitors - entry is on the field on the day. See the Competitors tab below for more information. 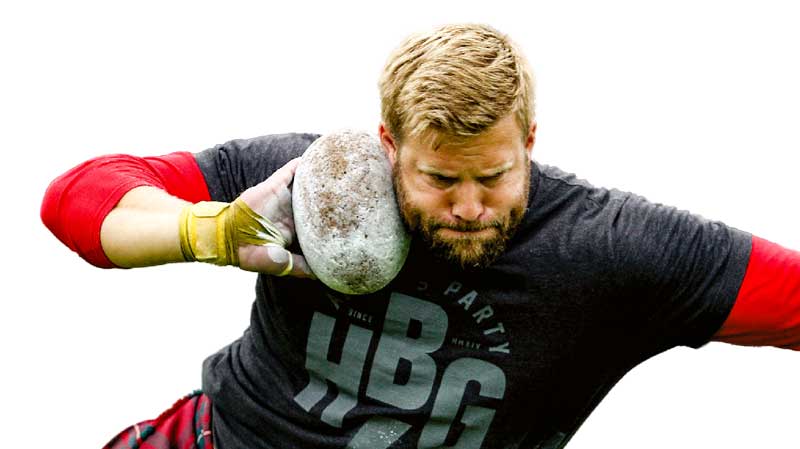 Light events on the track and field  including sprint and middle distance running (100m to 3200m), long jump, high jump and triple jump, take place throughout the day along with races for children and visitors. See the full timetable of events here>

Field and track events have been a long-standing feature of the Highland Games – dating back to when the Clan Chiefs sought clansmen who were swift of foot to deliver messages across the land through difficult terrain. At lunchtime, runners take part in the Hill Race – a 2.5 mile race with 500 feet of ascent – competing for the Kilninver Cup. The spectating crowds really get behind the runners as they re-enter the stadium for the final, gruelling circuit. 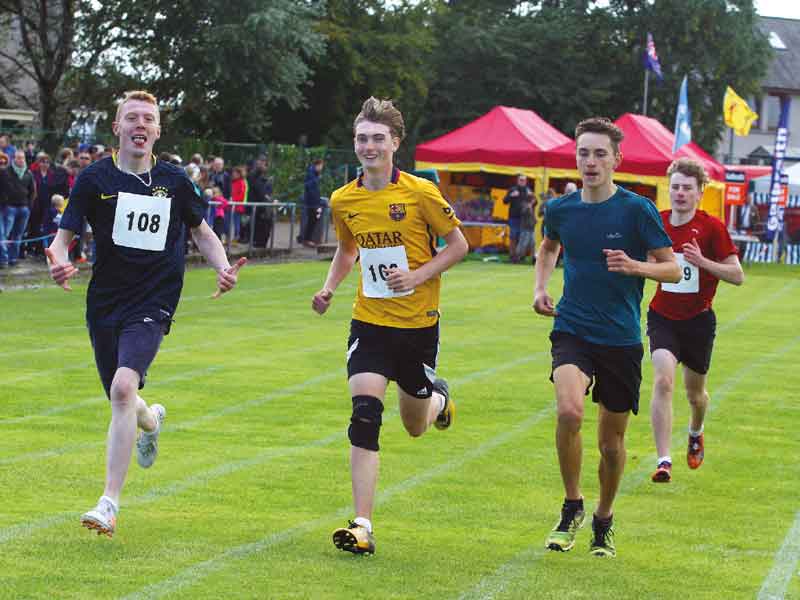 The Argyllshire Gathering is grateful for the ongoing sponsorship and support received from our generous sponsors for the Track & Light Events. In addition to the Kilninver Cup for the hill race, cash prizes are awarded in the Athletics competitions in recognition of the winning athletes’ fantastic performances at Oban Games. Prize details are in the Oban Games Souvenir Programme available on the day.

The heavy events attract a strong, enthusiastic following at Oban Games. Throughout history, the heavy events have been all about strength, stamina & agility as the Clan Chief looked to surround himself with the strongest clansmen. The heavy events are unique and found only at Highland Gatherings with both Open and Local classes. The popular Tug of War competition is open to any team of five – so do enter on the day!

Some Oban Games heavy events  - the British 56lb Weight for Distance, British Light Hammer and British Heavy Hammer championships - have been awarded British Championship status from the Scottish Highland Games Association and attract competitors from across Scotland and from around the world. See the timetable of events> 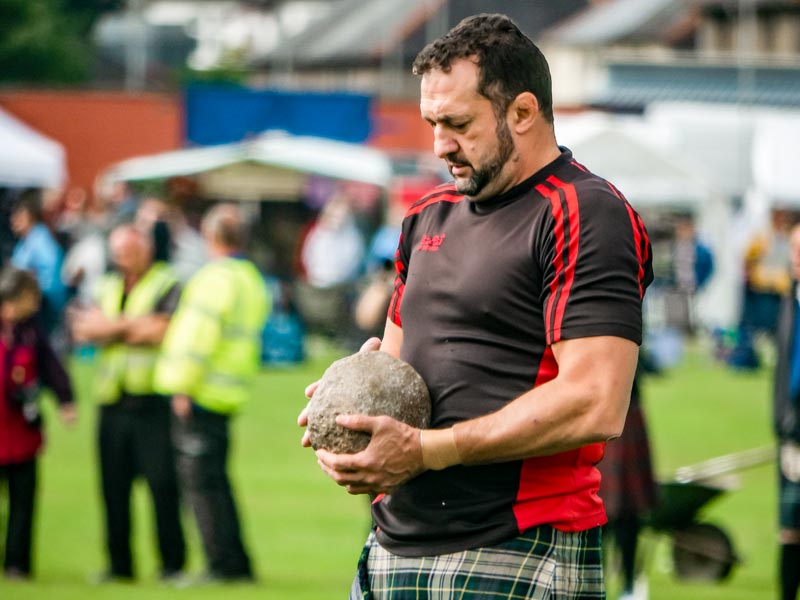 Arguably, the most spectacular Highland event is Tossing the Caber. In an extreme test of strength, balance and timing the competitor must raise a tree trunk (weighing up to 130lbs and measuring up to 20’) to a vertical position, and balancing it, run to build up momentum. At a precise moment, he throws the trunk in such a way that the larger end hits the ground with the smaller end making a semi-circle in the air. Three attempts are allowed, and these are scored by points deducted from the angle the trunk lands away from the perfect mark of “12 o’clock”.

This event is the same as the Olympic Shot Put, except that a smooth rounded stone is used instead of a steel ball. Regular style uses a stone weighing just over 12 lbs. With a 7’6” run-up, the stone is thrown from behind a toeboard or “trig”. Using one hand only, the stone must be thrown from in front of the shoulder and the best of three attempts is measured from where the throw is made to the nearest break in the ground where the stone lands. With Braemar or Standing style, the stone weighs 26lbs, and no run-up is allowed. A competitor fouls if he touches the top of the trig or the ground beyond it.

Weight for Distance 26lb and 50lb

Like the athletes who throw them, the weights, (18” in length overall,) are made of metal! A ring handle is attached by a chain, and these are thrown with one hand only from behind the trig, with a run up of 9’. Any style may be used to throw the weights, though the most efficient is to spin like a discus thrower. The rules stipulate that the competitor must be standing after throwing the weight. Again, three attempts are allowed, with measuring and fouls the same as for Putting the Stone.

This weight is a block (or ball) with a total weight of 56lbs. Again a ring handle is used to project the weight, but this time, over a bar. One of the competitors requests the starting height, which may be passed by other contenders until it is of a height deemed suitable for them to enter, after which they must compete with each raise of the bar. One hand is used, and three attempts are allowed to clear the bar. Measurements are taken from the ground to the top of the bar midway between the supports. If all the entrants dislodge the bar at the same height, the competitor with the least misses in the previous round is declared the winner.

The hammer consists of a cane shaft attached to a round metal head. There are two weights of hammer – 16lbs and 22lbs, though both measure 50”. Facing away from the throwing area, and with feet firmly planted on the ground, the entrant swings the hammer three times around the head and then releases it. The best of three attempts is measured as with Putting the Stone, with the same rules on fouling also applying.

The Argyllshire Gathering is grateful for the ongoing sponsorship and support received from our generous sponsors for the Heavy Events. In addition to the British Championship events, cash prizes are awarded in the Heavy competitions in recognition of the winners’ fantastic performances at Oban Games. (Prize details are in the Oban Games Souvenir Programme available on the day.)

The Track, Light and Heavy Field events take place throughout the day with open and local novice events. All competing athletes must be registered with The Scottish Highland Games Association.

Competitors enter competitions on the day on the field. The Track, Light and Heavy Field events rules are here> 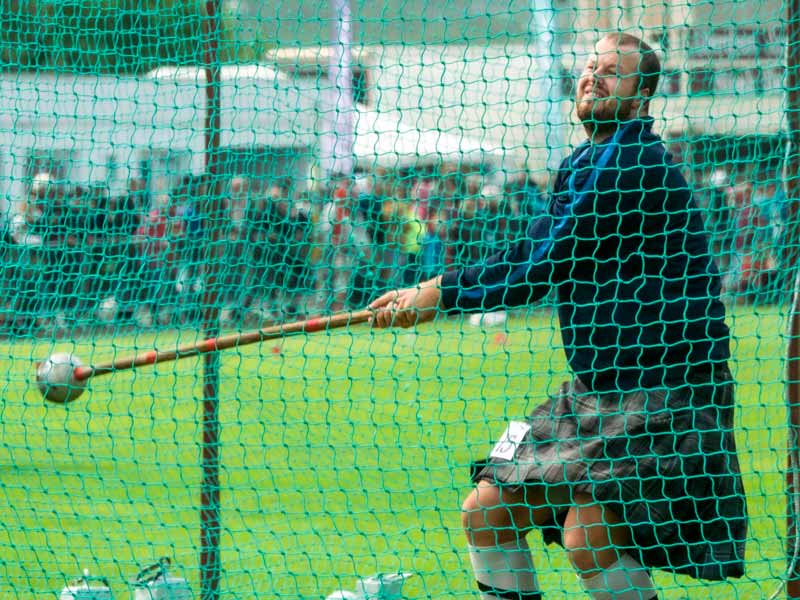