The Highland Dance competitions are an Oban Games highlight - full of Highland tradition, technical skill, stamina and strength. The Argyllshire Gathering is grateful to the Highland Society of London for sponsorship of the dancing events.

Enjoy the spectacle of the finest local, national and international Highland dancers delivering an exciting day of dance competition.

Competitors - application forms and Rules are on the Competitors tab below. 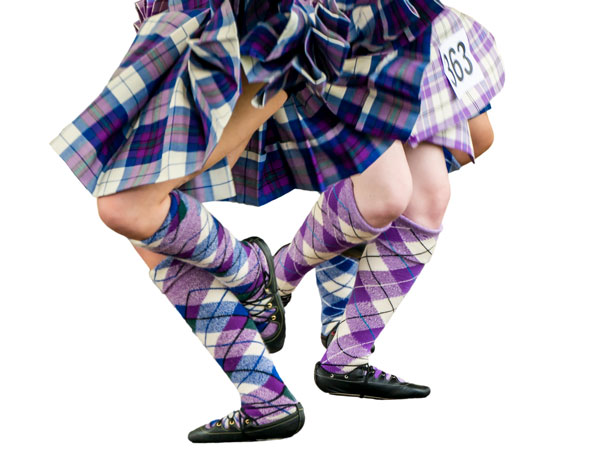 The origins of traditional Highland Dance have been lost in the mists of time and are surrounded by myths and folklore. There can, however, be no doubt that Highland Dancing is an art that requires extraordinary skill, stamina and strength. Dancers need to work every muscle in the body to perform intricate steps whilst in mid-air. Such is the intensity of exercise that soldiers practiced Highland Dancing and customarily, only men danced. Nowadays, the majority of dancers are female.

Judges at the Oban Games will be looking for technique and timing as well as the competitor’s deportment and their interpretation of the dance. As a spectator you will be able to witness the most exciting local, national and international talent, as the dancers brush, leap and high-cut their way to a medal. The competitions take place throughout Games day in the main arena in front of the main Grandstand.

The oldest dance is the Gille Chaluim (Sword Dance) which dates from the time of King Malcolm Canmore (1058-1093). Defeating an adversary in battle, he is said to have laid down his sword over that of his defeated opponent in the sign of the cross, and executed a dance of victory over them. It is a warlike dance requiring great skill. The feet must be placed close to the swords, but must never touch them.

The Seann Triubhas (Old Trousers) dates back to the time after Culloden in 1746 when the Highlander was forbidden to wear the kilt. It shows his contempt for having to dance in the hated trousers (trews), and he is trying to shake off the confining trouser legs. The last part of the dance in quick time shows his joy at returning once more to the wearing of the beloved kilt.

The Highland Fling is said to have been inspired by the sight of a red deer stag prancing on the hillside. The arms and fingers are held in the form of the stag’s antlers (cabar feidh), and the dancer must never move from the spot on which the dance began.

The Reels are danced by four people, and the origin is obscure. The slow movement, the Strathspey, is thought by many to be a mourning dance, used at funerals. The Reel of Tulloch, or Thullachan, is reputed to have originated in the village of Tulloch; where, on a cold, snowy morning, the minister was delayed, and the congregation started swinging each other by the arm to keep warm.

The Dancing, which takes place on the Games Field in front of the seated Grandstand, starts at 10am with the Confined to Argyll & Bute competitions. The Open Competitions - continue in the afternoon programme from 2pm onwards. Find out more in the Oban Games Timetable>

*PLEASE NOTE – Dancers must arrive competition ready (in kilt), as due to COVID regulations, no changing tent will be provided.

The Argyllshire Gathering is grateful for the ongoing sponsorship and support for the Dancing events from The Highland Society of London, Kilchoan Estates and Helen Mostyn.

In addition to cash prizes in all dance competitions, a splendid collection of trophies are awarded in recognition of the winning dancers’ fantastic performances at Oban Games.

The Poltalloch Cup - awarded by the late Lt. Col. George Malcolm of Poltalloch, - presented to the best individual Armed Service dancer in any of the competitions

To take part in the Argyllshire Gathering Highland Dance competition at Oban Games, complete an application form (download as PDF).

There is no fee for the dance competitions  – simply pay the appropriate Oban Games ticket price. Tickets can be bought on the day - more info here>

We look forward to seeing you at Oban Games.